Turning Point: How one Iron River man is living proof anything is possible. 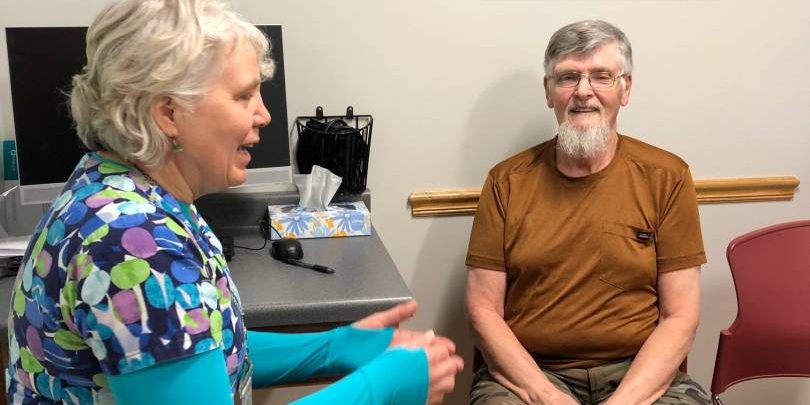 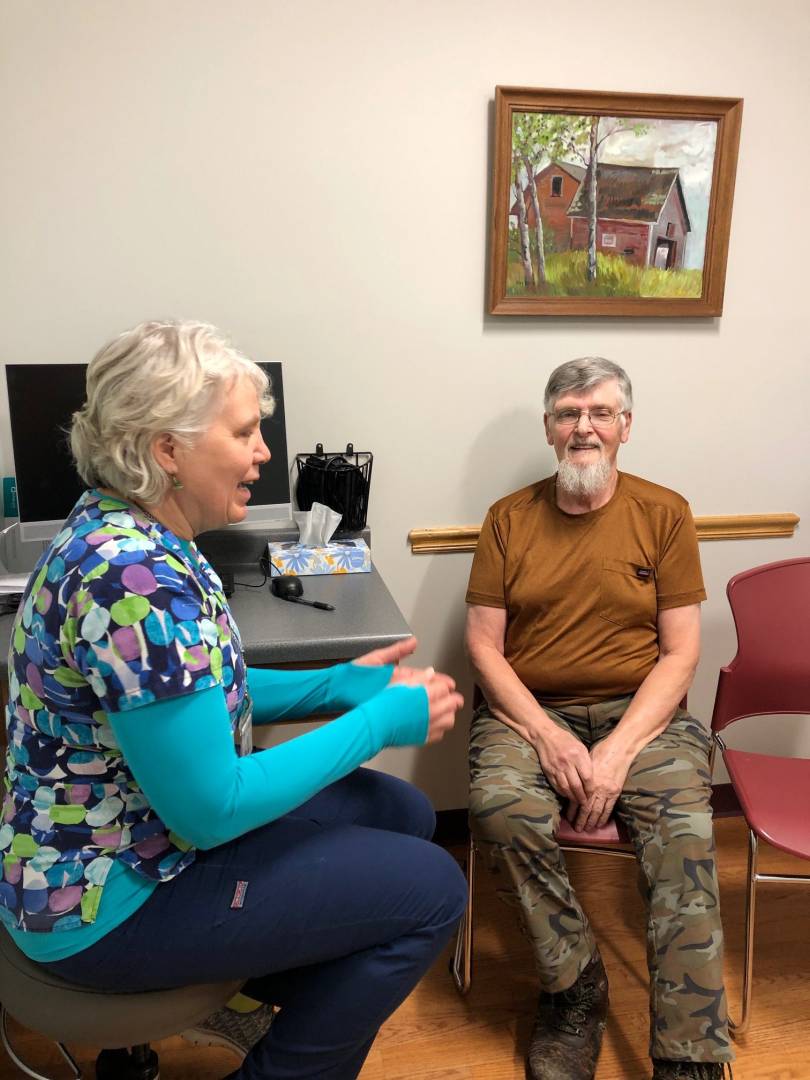 Merwyn speaking with Registered Nurse Gayle Gonsior at NorthLakes Community Clinic in Iron River. Gayle has been an active part of Merwyn’s care team for the past 3-years.

“I wouldn’t wish this on anyone. But, it changed my life,” declares Iron River resident Merwyn Lovblad of an experience four years ago that nearly destroyed him.

“I was at a friend’s house and didn’t feel right so I went home to take it easy,” he says of that fateful day. “Later that day a friend called and immediately knew something was wrong and called for help.”

Merwyn was having a stroke. The stroke left his right side paralyzed and he was unable to communicate.  At the time, doctors said he had little chance of a full recovery. Merwyn even recalls them saying, “You will never go home and live on your own again, let alone drive.”

But, Merwyn had a different plan.  He lives for hunting, fishing and playing with his 6 grandchildren.  He genuinely believed if he put his mind to it, he could recover.  He was right. Merwyn spent a brief time in a rehabilitation facility relearning basic skills like eating, speaking, walking and writing. But, before long his care team, while hesitant, said they’d let him try living on his own.

“When I got out, I went for a really slow walk with my son in the woods. I knew then that I would do anything to stay at home,” he recalls.

Recovery was slow but steady. During this time, Merwyn established care at NorthLakes Community Clinic in Iron River.  At first, he was just getting blood draws done for a previous heart condition that were then being sent on to Ashland but over time, he decided to establish all of his medical care at NorthLakes.

“The people here know me,” says Merwyn. “It is easy and they understand how to help me.”

As Merwyn recovered from his stroke, he started to acknowledge another issue that had been a part of him for years—his weight.  At his heaviest, Merwyn tipped the scale at nearly 300 pounds and would get winded easily. The combination of his stroke and weight made it difficult for him to get out in the woods, hunt and fish, or play with his grandkids.

It was about this time he approached his provider to see if she could issue a disabled hunting license. She refused. “She told me the only disability I had was that I needed to lose weight,” he recalls.

Once again, Merwyn was determined to take control of his life. He joined the local TOPS group in Iron River. TOPS which stands for Taking Off Pounds Sensibly is a hands on approach to weight loss. The group meets weekly in Iron River at the local church. In addition to joining the group, he also started walking more and changed his diet. The results paid off. Today, he weighs in at 173 pounds and recently won an award from the national TOPS organization for his efforts. More importantly, he’s enjoying hunting, fishing and playing with his grandkids. While he wouldn’t wish a stroke on anyone, he says it was this experience that changed his course in life.

“After the stroke, I wondered if I could ever get better. I’d wake up each day and ask myself if I was better and the answer would be no. But then I decided I needed to make a change. If nothing else I hope people learn from my story, they can do things they think they cannot do. They can do this. Because if I did it, you can do this too.”

Today, Merwyn still checks in regularly with his care team at NorthLakes Community Clinic in Iron River. He’s grateful for their help and for pushing him to be the best version of himself.

“I want to be around many years for my grandkids,” he says. “They helped me make sure I would be.”

NorthLakes Community Clinic loves partnering with patients on improving their overall life. They accept everyone, regardless of their ability to pay.  If you are interested in establishing a health care partner for you or your family, please call 888.834.4551 or learn more at nlccwi.org.

Open Enrollment for 2023 Health Insurance Begins: What to Know
November 7, 2022

Back to School Vaccination Tips
August 11, 2022