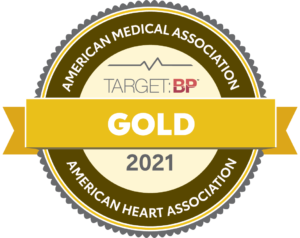 NorthLakes Community Clinic Lakewood and White Lake have been recognized by the American Heart Association (AHA) and American Medical Association (AMA) for their commitment to helping improve blood pressure (BP) control rates among the patient populations they serve, earning Gold level recognition as part of the 2020 Target: BP™ Recognition Program.  The Ashland and Minong Clinics have earned Participant level recognition.

The Gold award recognizes practices that have 70 percent or more of their adult patient population with high BP controlled.

The Participant award recognizes practices that have submitted data and committed to reducing the number of adult patients with uncontrolled BP.

Hypertension (high BP) is a leading risk factor for heart attacks, strokes, and preventable death in the U.S. In addition, there are 121.5 million U.S. adults living with high BP and less than half of those people have their BP under control – making both diagnosing and effectively managing hypertension critical. The U.S. Centers for Disease Control and Prevention states that heart disease and stroke continue to kill more people in the U.S. than other causes.

Target: BP is a national collaboration between the AHA and the AMA aimed at reducing the number of Americans who suffer from heart attacks and strokes each year by urging physician practices, health systems and patients to prioritize BP control. The initiative aims to help health care organizations improve blood pressure control rates through use of AMA MAP BP™ evidence-based protocols and recognizes that NorthLakes Community Clinic is committed to improving blood pressure control.

The Target: BP Recognition Program celebrates physician practices and health systems, who treat patients with hypertension, for achieving BP control rates at or above 70 percent within the populations they serve. These achievements will ultimately lead to a reduction in the number of Americans who suffer heart attacks and strokes.